As we save the date and plan for Denison Pride’s reunion gathering in June 2018, here’s a review of 2017’s very well-attended event.  Once again, alums, allies, and other members of the Denison community are warmly invited.

Denison Pride hosted a large group of returning alums and allies at its Reunion Weekend gathering on Saturday, June 3, 2017. 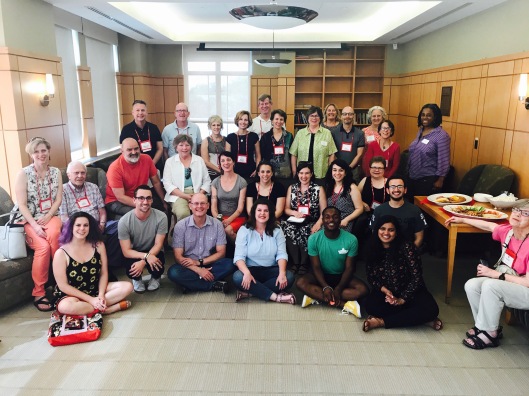 Some of the many allies, alums, faculty, members of the Denison administration, and students gathered at the June Reunion event.

Masten, who had received a Denison Alumni Citation earlier Saturday in part for work in the late 1980s co-founding the Denison GLBT Alumni Association (now Denison Pride), facilitated the discussion.

President, Adam Weinberg, and Vice President for Student Development Laurel Kennedy joined us with updates and discussion of campus climate.  We also welcomed Alison Williams in her role as Associate Provost for Diversity and Intercultural Education.

Across the country, the post-presidential-election period has been a particularly challenging time for LGBTQ and other minority communities on college campuses.  Alums were glad to hear from Kennedy and othersthat there continue to be strong support systems in place at Denison.

Vice President for Institutional Advancement Julie Houpt ’75 helped the gathering remember the life and Denison legacy of Life Trustee and longtime Denison Pride supporter Joe McMahon ’62.  Houpt emphasized McMahon’s early work on the board of trustees advancing a diverse and inclusive Denison, and led the group in a moment of silence in his memory. Prof. Robin Bartlett (Economics/Queer Studies) noted that McMahon had hosted gatherings for LGBTQ and other Denisonians in his home during earlier gay and lesbian Marches on Washington and the display of the AIDS Memorial Quilt on the National Mall.

Outlook, Denison’s group for LGBTQ students and allies, was well represented by incoming president Rhea Patil ’19 and others.  Patil reviewed Outlook’s program of activities this year.  In 2017-18, Outlook plans to continue its “intersectional” work, collaborating and meeting with the full variety of other student groups on campus — helping all understand how our identities and communities are overlapping and related.

Prof. Sheila Wilson (Studio Art) and Sara Hartsock ’18, encouraged alums to participate the Expanding Archives Project, a Mellon-supported initiative to document LGBTQ history at Denison.  To see or contribute materials or interviews in the project, go to: http://expandingarchives.org/

Alums, allies, and students participated in a lively discussion of campus issues.  Outlook leaders and current students emphasized how useful they would find a dedicated space for LGBTQ students and allies to gather and hold meetings.  Meanwhile, as Dr. Marci McCaulay, retired director of the Center for Women & Gender Action noted, that space has been a resource for LGBTQ students and many other organizations.

Pres. Weinberg speaks at Alumni Convocation in June.  Denison Pride co-founder Jeffrey Masten (far right) was among those honored with the Alumni Citation.

Outlook members also stressed the importance of the alumni-supported Outlook Fund, which helps with programming and allows students to travel to conferences, including the annual Midwest Bisexual Lesbian Gay Transgender Ally College Conference (MBLGTACC).  Alums can designate their Annual Fund gifts to support the Outlook Fund.

Big Red thanks to all students, faculty, alums, and friends who attended the event, and to Mary Frazell, director of Alumni and Family Engagement, for her assistance with our gathering.

We were especially happy to have so many alumni allies and friends of the group in attendance. Terrific to see so many members of the larger Denison community represented!

As one straight alum ally from the 1980s noted on Facebook, “This was an especially meaningful gathering.”  Mark your schedule for June of 2018!